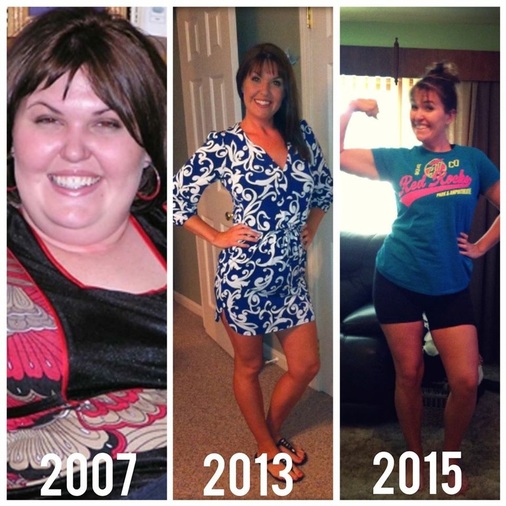 Breanne asked me to participate in "Testimonial Tuesday" a couple of months ago. I was humbled and excited to share my story and my love for this amazing gym, but have struggled greatly in putting my thoughts, feelings, experiences, frustrations and victories into words. That's unusual for me as I've always been a writer but I believe it is because I have been trying to wrap my "fitness journey" into a nice little box, chart it out in one straight line. But I can't because it has been messy. And painful. And wonderful. And life-changing.

I have struggled with weight and body image since high school. While in college, I gained more weight than I'd like to admit. The photo on the left was taken in 2007 and I would guess that I weighed approximately 250 lbs. I can't say for sure because I stayed away from scales. I stayed away from cameras. In fact, I stayed away from people. Not everyone of course, but from old friends and family. I wouldn't admit it at the time, but I was so unhappy. I remember saying quite often that I was fine with my weight as long as I just stayed the size I was. But I wasn’t fine. I felt bad – unhealthy, unhappy, uncomfortable and unmotivated.

When I was pregnant with my son, I made some huge life changes. In short, I ended a relationship, relocated, left a job...pretty much changed everything in every way. I often said that after my son was born, I was going to get into better shape than ever before. I swore it. But I didn't really believe it because I had no idea HOW to do it.

And that's where Everbody's comes in...
I toyed with the idea of joining the gym for quite a while. Talked about it, debated about it, made excuses for not doing it, and then finally....I did it. I remember the first day I stepped into the gym. I was terrified. I was sure everyone was looking at me, thinking that I did not belong in such a place. It took some time to shake off the nerves (and a devoted gym buddy) but eventually, I started to feel comfortable. I realized that no one was holding me back but myself. At the gym, I was surrounded by people that wanted me to succeed. Once I realized that, everything changed. Plus, there was this tremendous contagious energy surrounding the first season of the Biggest Loser. It was so magnetic that I wanted to be a part of it so I enrolled in the second season of the Biggest Loser. I ended up being more successful than I could ever have dreamed. I've participated in three seasons since then - gained a little, lost a little, gained a little. I am currently enrolled in my second session of Tabata Bootcamp and I can feel muscles I have never felt before. I can slowly, but surely see and feel my body changing, evolving, strengthening. While I may not be at my lowest weight, I am without a doubt the strongest and healthiest I have ever been in my life.

Fast forward to today...
Today I ran TWO MILES without stopping. TWO MILES PEOPLE!!! Two miles may not seem like much, but for me, it is MONUMENTAL. I used to hate running with an extreme and fierce passion and could barely run one block, and so, when I hit that two mile mark, I felt like screaming! I felt like I was going to look up and the clouds were going to part, the music was going to start playing, and the spotlight was going to be on me! My lungs were bursting and I was drenched in sweat but I wanted to keep going!

I absolutely would not have been able achieve these accomplishments without Everbody's. This gym is more than a building full of weights and mats and machines. It is a community of people supporting one another in making fundamental LIFE CHANGES. – Erin Emerson